If you’ve gotten deep into Ashtanga, like me, you’ve figured out by now that there is a lot of question and tension about how to practice the sequence. The practice has changed and evolved over time, and depending on what year your teacher studied in Mysore, there are going to be some differences in the teaching.

It’s all very minor. Here are some examples:

These are all very minor changes, and whether you look to your nose or toes, or do three forward folds instead of two, as long as your are practicing the method (breath, bandhas, drishti, and posture), then everyone benefits the same.

Everything changes and evolves over time. A great article explaining this is called  Ashtanga As It Was  by Nancy Gilgoff.  She mentions many things that are different such as how Guruji taught her 5 Surya Namaskara A & B to start, but then had her cut them back to three each and keep it that way. There are some postures that he didn’t teach and at times he had students practicing primary and intermediate series twice a day! This isn’t a big mystery as you can see that he hasn’t included some postures in Yoga Mala, and he teaches to come back to Samastitihi (Equal Standing Posture/Mountain Posture) after all four Prasarita Padottanasanas, which is still how Manju Jois teaches. Also, you can find YouTube videos of Guruji teaching Tim Miller, Richard Freeman, Chuck Miller, Maty Ezraty, Eddie Stern some others where he skips Parivritta Parshvakonasana, which Nancy also mentions that he thought was a “crazy posture”. Some people come up into full handstand in Navasana, but in this video they all barely lift their feet off the ground. In the seated postures, there were a minimal number of vinyasas. There were no vinyasas between sides. Moreover, there were no vinyasas between variations – so all of Janu Sirsasana A, B, and C were done together (right side, left side of A, right, left of B, right, left of C), then a vinyasa before Marichyasana. Then all of the Marichyasana variations, A, B, C, and D, were done together, without vinyasas between sides or variations; then a vinyasa before three Navasana. Baddha Konasana, Upavishta Konasana, and Supta Konasana were also grouped together without vinyasas between them. Ubhaya Padangusthasana and Urdhva Mukha Paschimottanasana were also done together, with no vinyasa between – we were taught to simply change the hand position after Ubhaya Padangusthasana and go right into Urdhva Mukha Paschimottanasana.

I think it’s good to know the history of how the practice changed an evolved. I hear a lot of people question why things changed and say, why wouldn’t we practice it the way Guruji originally taught it? I think those questions are good, and I have questioned it all myself, but too much focus on that, especially where it comes to a point of resisting practice is missing the actual point of practice.

Who knows exactly why Guruji changed it or why anything in the world changes? Things evolve and usually become more refined over time. Perhaps he changed things because so many students started flocking to Mysore and he couldn’t teach individually anymore. Maybe he felt that the majority of people needed to build strength, so he could make sure that happened with the added vinyasas if he wasn’t able to give so much individual attention. Maybe he was experimenting more in the early days, and as things changed, he was able to refine and evolve the practice? Maybe it’s something completely beyond my range of thinking! There are a ton of rumors and theories. What we do know is that it was one way, and then things changed, and now it’s a little different. The foundations are all still the same though which is what matters.

Guruji always said to his students, “Teach how I taught you.” This means that whoever your teacher is, you might learn the practice a little bit differently than another teacher. It doesn’t make it wrong, and it’s disheartening when I come across anger and judgment about this topic in the yoga community. It’s just karma (cause & effect). Whoever your teacher is, I think it’s important to accept and respect them. If you do not connect, then look for another teacher and try again. The only common theme is that you commit to the method. The practice works the same once you make the decision to commit. 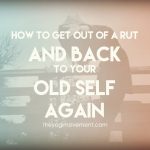 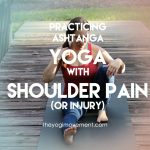